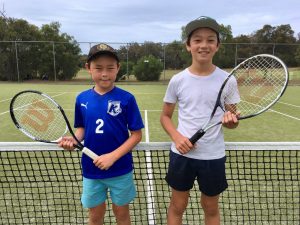 Yuma Jones has won the Lower Great Southern Tennis Association’s 10 years and younger junior boys tennis championship.  He went through the round robin and knockout stage undefeated, winning the final 6-2.

Kai Jones was the runner up in the 12 and under boys event. He won through to the final but lost 7-6 after a hard-fought tie break that went to 7-5.

Both boys performed with outstanding sportsmanship and determination, reflecting the high quality of their Saturday morning coaching program run by their father, Mark Jones, at the Denmark Tennis Club.

The annual junior tournament was held at the Lawley Park Tennis Club in Albany on Sunday February 9th. There was a strong field of 50 players, who came from Kendenup, Bremer Bay, Denmark, and Albany.

Lower Great Southern Tennis Association president, Les Bairstow, said that he was ‘delighted with the big turnout of junior players at the event’.

← Back to previous page